Why Bother to Wave? 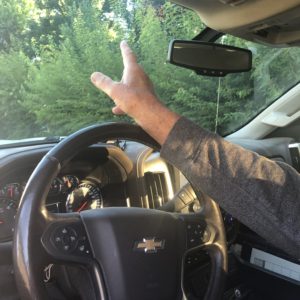 Why Bother to Wave?

I have not driven down a two-lane highway in Nebraska for quite some time, but it has not been so long ago that I don’t remember what it was like. The traffic was always sparse, and slow moving. No one was in a hurry. The vehicles we’d meet on these roads that connected rural communities were mostly older pickup trucks. The drivers were usually men in worn out cowboy hats. Through bug splattered windshields, small waves were always exchanged in passing. This was how the native Nebraskans acknowledged others. It didn’t matter if you were an out of towner or not. It was just the way it was done.

A Short History in Waves

This lifting of the index finger greeting took less than a second with hardly any muscular effort exerted. The hand didn’t even have to leave the steering wheel. Eyes may or may not have met, but you knew you’d been seen and acknowledged by another human being on a lonely and quiet stretch of highway. It was a small, yet significant and a friendly thing to do.

Taking road trips with our sons when they were young always included driving the quickest and most efficient route, usually on an interstate at 75 mph. But the high speed did not deter our kids from playing the “wave game” with other drivers or “honk your horn game” with the truckers. It was a competition of course. Whoever could get the most people to respond with a friendly wave of the hand or the most honks from a trucker’s horn, won. It helped to pass the time, kept them occupied and happy.

Then there was the wave that came from the conductor who rode in the caboose at the end of a long train. I always anticipated seeing the man who rode in the last car, wearing a blue and white billed hat, dressed in bib overalls and waving his beefy arm in a casual manner. It not only signaled the end of the train, but the conductor’s wave gave notice to all of those who’d been watching and waiting for the train to pass.

Idaho drivers are not like those friendly rural Nebraska drivers. They don’t lift a finger in passing. My grandchildren never learned to play the wave game and cabooses are no longer coupled to freight trains. So, is this friendly gesture of waving obsolete? Absolutely not. It’s just not as popular among the populace. But it does not mean it can’t or should not have a comeback.

For instance, I make a point of waving to others whenever I am out and about. While jogging down the street, I will lift my hand when passing another runner or walker. Even if they happen to have their ear buds in their ears, if and when they look up, they will catch my wave, sometimes even waving back or smiling.

Fellow road bikers are the friendliest of the wavers. Passing each other on the roadways our fingers and sometimes even the whole hand lifts off the handlebar in greeting. Are bikers happier than runners or just more willing to notice others?

Then, just yesterday, while kayaking on a section of the lake where the railroad tracks run parallel to the water’s edge, an engineer lifted his beefy arm and waved to me. It was an amiable gesture. A wonderful exchange between two strangers. It made my heart leap. Funny how something so small can be so significant.

Why bother to wave? It only takes a second, it uses minimal effort, but it could make a big difference to another human being. Go ahead, wave. I dare ya!