Why Bother to Think About the Power of Three? 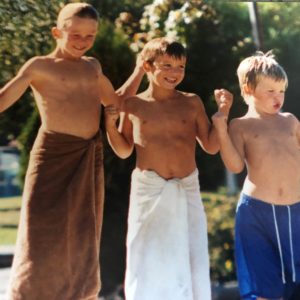 Why Bother to Think About the Power of Three?

Though I’ve only golfed once, I knew the game was not for me. It requires too much focus and not enough movement. My husband, on the other hand, likes to golf. So much so that this year, he joined a golf league for the first time. Every Monday, he meets up with his teammates at the local golf course and plays nineteen holes against a different opponent each week. When his game goes well, he comes home happy. But when his game goes poorly, well then, he comes home an unhappy man.

One evening after a game, he came home and went directly into our office. Sitting down at the desk, he began writing. Then he showed me what he’d written. Breathe, relax, enjoy. He told me that although there are a million things he could change about his golf game, he chose only three.

The Magic of Three

Three is a small number, but also very powerful. Any time we can narrow our thoughts or ideas down to three specific ones, then we can use the power that comes with three.

For instance, think of Isaac Newton. He was a brilliant man who developed the laws of motion. But he limited those laws to just three. Another example of the magic of three is in music.  It only takes three notes to build a block of harmony.

The number three theory also applies to religious thoughts. There is the Trinity; the Father, Son and Holy Ghost as well as the idea that a cord of three strands is not easily broken.

In the area of literature, in every story, book or movie there are only three parts; a beginning, middle and end.

What is more, famous people like Julius Caesar limited some of his remarks to three words;  “ I came, I saw, I conquered.”  The French sum up their national motto in only three words; Liberty, Equality, Fraternity. Whoever wrote the motto for the olympics condensed it to three words; swifter, higher, stronger.

Then there are the catchy marketing mottoes that are also reduced to three words. For instance, “Finger Lickin’ Good,” “ Snap! Crackle! Pop!” and “Diamonds are Forever.”

Whether we want to communicate something effectively to someone else or we desire to recall with ease the commitment we’ve made to change something like our golf game, narrow it down to three, and we can do it with ease.

Why bother to think about the power of three? Give it a try yourself. Maybe it means you’ll simplify your list of life long goals, or write a personal motto to motivate yourself. Either way, thinking, writing and doing will lead you to change. One, two, three, go.