Why Bother to Speak the Unspeakable? 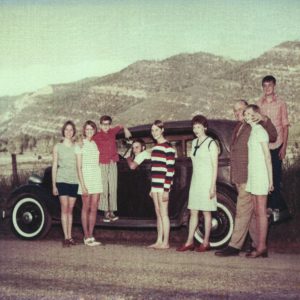 Why Bother to Speak the Unspeakable?

My siblings were the ones with whom I shared childhood. We bunked together, the girls in one bedroom, the boys in another. We shared the same meals around the same dining room table, we squeezed ourselves into the back seat of the family car.

But not only did we partake in ordinary and mundane life with each other, we also shared a common tragedy; the death of our dad, who ended his life when he was forty-nine years old.

Silence is Not Golden

His suicide was tragic, unexpected and shocking. Our grief was obvious. Our pain was acute. Yet, we had no idea of how to talk about any of it. So, instead, like silos on a prairie, we stored our sadness away from each other for years, until a most unusual event opened the shaft between us, and our words spilled out.

In the winter of 2020, the Chinese virus invaded the world. Suddenly, everyone was forced to isolate themselves. Social contact was risky, dangerous and deadly for some.

It was a depressing time. But even in the worst of circumstances one of my siblings created a way for our siblings to stay connected in spite of madness, mandates and regulations.

We connected with a conference call on the same evening of each week and at the same time. The topic of discussion centered around one question, submitted beforehand, by one sibling the rest of us taking turns in subsequent weeks. We could choose to participate, or not.

When I got the invitation to connect to these conference calls via email, I deleted it. I’d experienced these types of calls before. When Mom was near the end of her life, we set conference calls to try and decide how best to care for her. But in my opinion, they were useless. A lot of words were said, but never a consensus. The older siblings had a way of dominating the conversation and emotions always ran high.

But I was curious about these Macek Maverick calls as they were aptly named. After a few weeks went by I took a chance and joined one of the calls. The conversation was lively, friendly, funny and insightful. Each sibling took their turn, and no one talked over the other person.

The following week it was my turn to submit a question and I pondered long and hard before I composed my query, “What was your first reaction when you heard how Dad had died?”

My oldest brother spoke first. He talked about his anger. Then my older sisters each took their turns. They’d been plagued with guilt, and confusion. My other two brothers related to feelings of anger, while I’d felt dumbfounded. Finally, after years of silence, we spoke about the unspeakable, we expressed the inexpressible. Our stored-up stories of grief finally spilled out.

Why bother to speak the unspeakable? Talking about tough topics validates just how tough the topic is, and also strengthens the links between those who survive their tragedies.