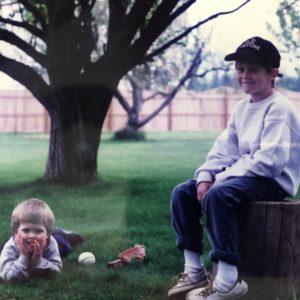 When our sons became involved in various extracurricular activities, it was a hard but logical choice for us to move off our five acre parcel in the country and into town. The house we bought was small, but sat on ¾ acres and at the time, was surrounded by fallow farmland. It still felt like a country setting even though we were in the city limits.

Selling out for Subdivisions

But then our neighbors sold off their empty fields that surrounded our oasis of acreage and those empty fields sprouted subdivisions. We were disheartened to see the landscape change in such a short time, but we also wondered if we could make a profit by selling a portion of our plot of land.

“We could get two more houses on our lot and make some money,” my husband surmised. The idea of becoming a little wealthier rolled around inside our minds and dollar signs danced in our heads.

In the meantime though, our sons took over the large patch of land beside our house. First it became a football field and I watched from the kitchen window as they threw long passes, and tackled each other in the rain or snow. Then the lot became a whiffle ball field, after that, a softball field and when I coached soccer for little tikes, it became our arena for practice.

In a portion of the lot I staked out a garden and planted corn, giving wagon loads of it to our neighbors living in the subdivision. But there was still plenty of room for birthday party treasure hunts, Easter egg chases and sleeping under the stars. When our sons became teenagers they threw the frisbee the length of the lot and held golf competitions to see who could whack their golf ball the farthest.

Then my husband and I discussed another money making venture. Maybe building a larger house for ourselves and renting out the smaller house would be profitable. I briefly daydreamed about a bigger house with two or three bathrooms instead of one and a roomier kitchen. But, I couldn’t imagine strangers living in my old house, with their proximity so close to my new one. That plan faded and we remained in our little house with the big empty lot beside it.

Then while on vacation last year, we stayed in a tiny house and my husband had another brilliant idea, “I could easily build two of these on our extra lot and rent them out as vacation homes.” Yet, when I thought about cleaning up behind strangers, and how their presence would infringe on my space, this lucrative plan also lost its appeal.

Over the years, we’ve weighed these different money making ventures and mulled over worthy ways to profit from our space. In the meantime, the empty patch of land beside our house took on a value all its own; it had become expansive space for our family.

Why bother leaving well enough alone? Some things are best left undeveloped. A patch of space offers width and depth to life.  Expansiveness is worth keeping. It may be fallow ground, but it is our ground.